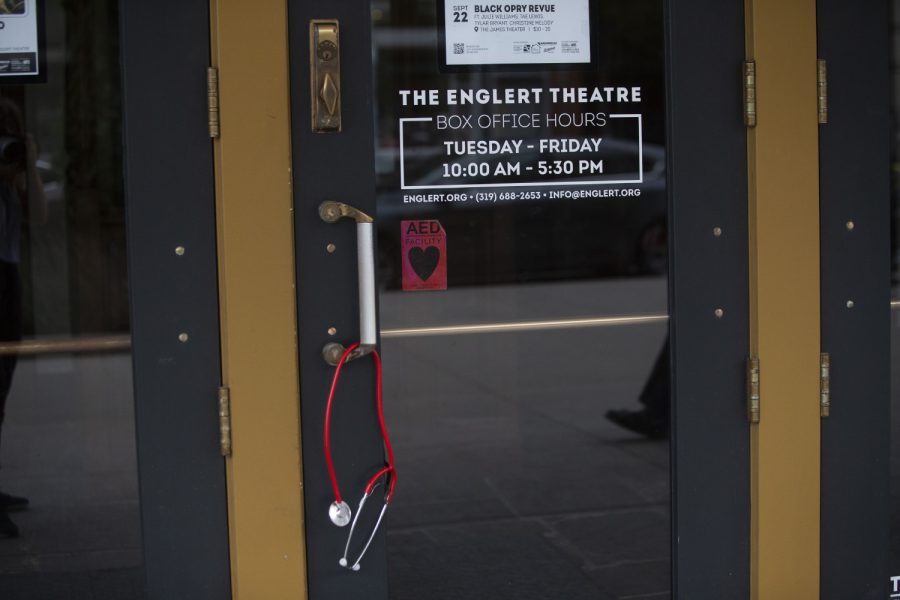 After almost two and a half years of tireless fight against COVID-19, the emergency services on the front line received a “thank you” from Theater Englert.

At the heart of the fund is the notion that first responders, particularly healthcare workers, worked every day, sometimes risking their lives or the lives of their families, to help care for patients with COVID-19.

Englert Theater Executive Director John Schickedanz wrote in an email to The Daily Iowan that the Englert will be helping frontline responders with their mental health after these grueling years of a public health crisis.

“Just as frontline responders have played a critical role in healing us physically during the pandemic, we know the arts can have a tremendous impact on mental health and healing,” he wrote. “We’re excited to offer frontline responders the opportunity to find calm through art.”

Schickedanz noted that he particularly admires the renowned medical professionals who work in the Iowa City area, so giving them a free night to see the “equally renowned” artists coming through the Englert is the perfect offer to give something back.

TIED TOGETHER: UIHC has stopped accepting new inpatients for its eating disorder program

The idea for the fund came from Roman Terrill, a member of the Englert Fellowship for the Future, who met with Englert in February to discuss how to give back to frontline responders. Schickedanz wrote that it took months to organize and revise the idea to become what it is now.

READ:  The Next Crisis In Inevitable. The Urgent Call For The Prepared Leader

Terrill funded the 600 free tickets and said he looks forward to the fund finally being open to the public and for healthcare workers to get the recognition they deserve.

“It seems like 10 years ago now, but it’s only been a few years since people were applauding the doctors on the way to the hospital,” Terrill said. “It was important for me to somehow remember and in some ways have a more lasting memory of the sacrifices these people made.”

Englert Development Director Katie Roche oversaw the implementation of the project. She wrote in an email to the TUE that she was impressed by Terrill’s idea and thought it was a great way to recognize healthcare workers.

“I thought Roman’s idea would be such a simple way to show gratitude and offer to our healthcare heroes,” Roche wrote. “His generosity and creativity is a real gift to Englert and our community.”

She said it took about four months to bring the project together, including organizing with Englert’s partners, implementing new ticketing software, and dealing with staff shortages and overwork — a problem faced by many arts organizations.

The Englert particularly encourages local health workers, such as employers at Mercy Hospital, the University of Iowa Hospitals and Clinics and IDT Integrated DNA Technologies, Roche said. Since the fund has been relaunched, she expects tickets to be claimed soon.

“Our partners are delighted to be able to offer tickets to their employees,” wrote Roche. “We really should see tickets being distributed and even used over the next few weeks.”

Bodies Bodies Bodies is a pleasantly odd film in the sense that its real point isn’t in its plot or narrative, but in what its characters are trying to be.…