Eye trauma is one of the leading causes of blindness worldwide [1,2]. It can be classified into open globe injury and closed globe injury, but in both cases traumatic retinal detachment or traumatic glaucoma can occur after the injury, both of which can be complicated. In cases of lens injury or vitreous hemorrhage, traumatic glaucoma often follows [3-7]. In addition, elevated intraocular pressure (IOP) often occurs after vitreoretinal or scleral surgery. [8-10]. Glaucoma surgery after retinal detachment scleral buckling surgery is difficult, and trabeculectomy can lead to poor postoperative outcomes in patients with conjunctival scarring. Furthermore, the presence of a clip can limit the operating space and cause problems during implant insertion. In this report, we describe the good results of the Ahmed Glaucoma Valve Implant® (AGVI) using partial clip resection after a rounding procedure for traumatic retinal detachment.

An 11-year-old boy had a traumatic rupture of the globe in his right eye (OD) when he was hit with a stick while playing. He was injured in March 2020. The eye ruptured due to a blunt perforation of the sclera and iris. The choroid and part of the vitreous body were prolapsed, and a hematoma was formed in the anterior chamber. On the same day, the patient underwent sclerocorneal sutures and lens extraction under general anesthesia. Approximately one month after the gum injury, the IOP increased to 25 mmHg. Glaucoma eye drops were started, and right IOP was maintained at 11 to 19 mmHg. Approximately five months after the injury, OD developed proliferative vitreoretinopathy due to a complete retinal detachment of unknown origin. During this period, he was monitored every month, each time with a fundus examination. The rounding operation was performed using a silicone sponge to detach the retina. Preoperative right visual acuity (RV) was 0.01, and postoperative RV was cf/50 cm. One month after surgery, the right IOP became poorly controlled and unresponsive to an additional dose of eye drops. The right IOP reached over 30 mmHg despite medication (latanoprost 0.005%, a combination of dorzolamide hydrochloride 1% and timolol maleate 0.5% and ripasudil hydrochloride hydrate 0.4%). Gonioscopy showed that quadrant 1/2 was open and quadrant 1/2 was not visible due to corneal opacities. Due to the poor post-traumatic condition of the iris and cornea and the limited surgical field after rounding (Figs 1A, 1B), we decided to partially remove the sponge and insert the AGVI after the rounding procedure. The detailed surgical procedure is described below. Preoperatively (Figs 1A, 1B) and postoperative (Figs 1C, 1D) photographs of the anterior segment are shown in Fig 1. 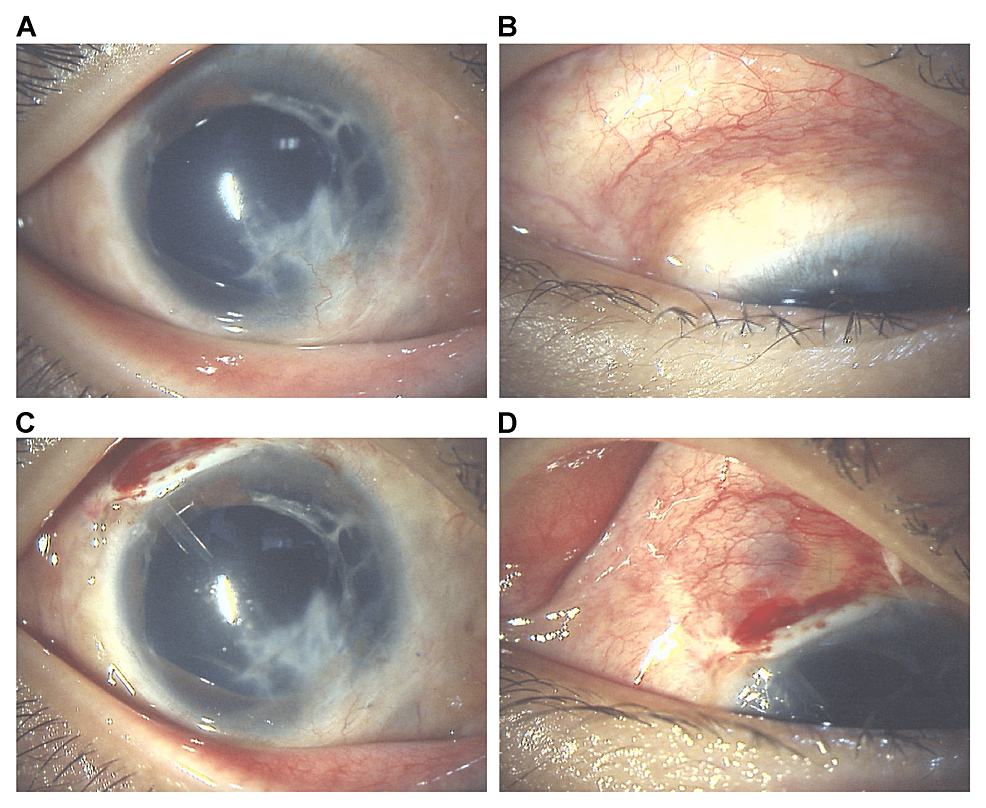 Figure
1: Preoperative and postoperative photograph of the anterior segment

B: Preoperative anterior ocular photograph of the superior temporal region.

C: Postoperative view of the anterior segment showing a tube inserted into the anterior chamber at 10–11 o’clock.

D: Postoperative anterior ocular view of the superior temporal region. The sponge in the area indicated by the arrow was removed and the tube was placed in the same place.

IOP reduction was achieved postoperatively, and the right IOP was 8 mmHg without medication the day after surgery. Due to high postoperative IOP, latanoprost 0.005% and dorzolamide hydrochloride/timolol maleate were given, but latanoprost 0.005% was discontinued three months after surgery because the right IOP was stable and the right IOP at that time was 17 mmHg. When the patient was examined one month later, no increase in IOP was observed. Since then, the patient has been on dorzolamide hydrochloride and timolol maleate solution, and his right IOP remained at 15-20 mmHg up to nine months after surgery, and the RV at this time was cf/40cm. In addition, fundus examinations were performed at each visit and no recurrence of retinal detachment or other postoperative complications was observed. Postoperative photographs of the anterior segment are shown in Figs 1C, 1D.

The operation was performed by two doctors: one who performed the rounding and the other who was in charge of glaucoma treatment. General anesthesia was administered using subconjunctival and sub-Tenon’s anesthesia via 2% xylocaine injection with epinephrine in the operative field. 5-0 silk is passed through the corneal ring at the 11 o’clock position. The conjunctival flap and Tenon’s capsule based on the fornix are elevated in the 9 to 12 o’clock quadrant. The thick Tenon’s capsule was traction sutured in the 10 and 1 o’clock directions using 5-0 silk (Fig 2A). The conjunctiva and Tenon’s capsule were dissected down to the silicone sponge, lateral rectus muscle, and superior rectus muscle. A control thread was applied to each eye muscle (Fig 2B). Part of the sponge at the planned insertion point (10 to 11 o’clock) was removed (Fig. 2C), and the end of the sponge was sutured to the sclera with 5-0 Dacron to prevent re-detachment of the retina due to release of the clip (Fig 2D). After confirming that water could pass through the AGVI (model FP7), the plate was inserted into the superior temporal area, and the tube was placed between the excised sponges (Figure 2E) and inserted into the anterior chamber after puncturing with a 23G needle at 1.5 mm from the corneal limbus (Fig. 2F). 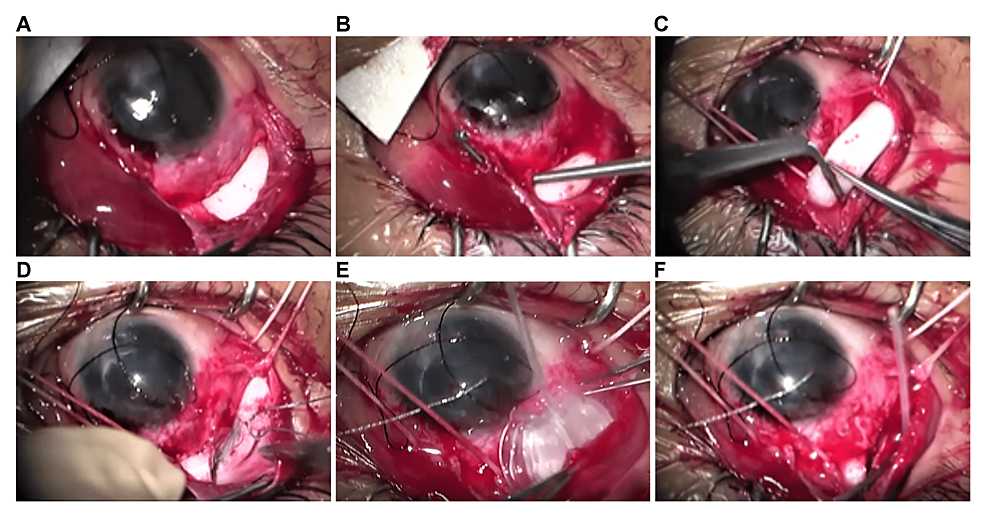 Figure
2: Photos during the operation

All photos were taken during surgery.

A: The conjunctiva is incised to expose the sponge. The distance from the corneal limbus to the proximal end of the sponge was approximately 5 mm.

B: A flap of the conjunctiva and Tenon capsule based on the fornix is ​​raised in the 9- to 12-o’clock quadrant and the rectus extrinsic and superior rectus muscles are identified.

C: Image taken just before cutting the sponge at 11 o’clock. The cut end of the sponge is firmly grasped and sutured to the sclera immediately after cutting. The sponge is cut and sewn in the same way in the 10 o’clock direction.

E: The Ahmed Glaucoma Valve Implant® (AGVI) is inserted in a deeper position.

F: A tube is inserted into the anterior chamber. The tube was passed through the cut part of the sponge and the plate was implanted behind it.

Scott et al. [11] reported the insertion of a Baerveldt device in 16 eyes after scleral buckling. They implanted the Baerveldt over or behind the girdle and over the adjacent rectus muscles. They chose for Baerveldt implantation the quadrant with the least amount of episcleral hardware from previous retinal surgery (ie, if a segmental or radial scleral clip was present and not a surrounding element, then the quadrant without a clip was chosen as the surgical site for implantation). This method has the advantage of allowing the surgeon to insert the implant in the usual procedure, but it can be difficult when the operative field is limited after sponge encirclement, as in our case.

Sidoti et al. [12] reported a series of 13 patients in whom a silicone tube was implanted to divert aqueous humor from the anterior chamber to the fibrous capsule surrounding the scleral silicone element placed during previous retinal detachment repair surgery. A silicone tube is inserted through a small incision into the fibrous capsule that covers the scleral implant. Because the distal end of the tube is already inside the formed membrane, it offers a low risk of postoperative hypotony without ligation of the tube. However, four of 13 cases (30.8%) required reoperation due to fibrous tube occlusion, and one of these required tube removal and reinsertion of the Molteno implant due to recurrent tube occlusion.

Smith et al. [13] drainage tubes were inserted in 11 eyes after scleral buckling. In seven of 11 cases, a long Krupin Denver tube with long valves was passed through the capsule around the silicone rubber using a method similar to that of Sidoti et al. In two of these seven cases (28.6%), there was fibrous obstruction of the distal part of the tube, which required reoperation. Other complications, such as conjunctival leakage and abnormal tube positioning, occurred, and reoperation was not necessary in only one of seven cases. In the remaining four cases, the Baerveldt implant was trimmed to a smaller size and fixed under the encircling band, and the tip of the tube was inserted into the anterior chamber. Although the risk of tube obstruction is low with this method, the risk of scleral perforation and eye rupture is a concern due to the additional pressure applied to the thinning sclera after buckling. [14].

Suh et al. [15] performed the same method of passing the distal part of the tube into the capsule around the rim in seven eyes of five patients. Postoperative examination did not show tube occlusion, and the only complication was tube misalignment in two eyes. Similar to Sidoti et al. and Smith et al., this method offers advantages, such as early postoperative IOP reduction, a relatively easy technique, and a low risk of postoperative hypotony. However, the arching material must be thin, narrow and located at the back.

When the sponge is used as material for the buckling operation, as in this case, the volume of the buckle is large; thus, implantation of the tube over the clip would increase the area and pressure of the tube in contact with the conjunctiva, which would increase the risk of postoperative complications. We also considered the option of passing the tube under the sponge, but the tube would be more susceptible to compression, and the effect of lowering IOP would be insufficient. Therefore, we decided to partially remove the sponge in this case.

Normally, the upper or lower temporal quadrant is chosen as the implant site because it is relatively less likely to cause complications. In this case, we chose the superior temporal quadrant because the inferior nasal side suffered the most damage from trauma, resulting in poor intraocular visibility due to severe corneal clouding. Furthermore, the lower side of the nose suffered the worst retinal detachment. For this reason, we felt that placing the implant as far from the lower nasal side as possible was ideal.

Typically, the plate is fixed to the sclera with 8-0 Vicryl before inserting the tube into the anterior chamber. However, in our case we did not fix the plate because we could confirm that the plate did not come forward as both ends of the sponge acted as a mound and did not move posteriorly, the sclera was quite thin and the large volume sponge made it difficult to push the plate and sclera through. However, fixing the plate to the sponge instead of the sclera would be optimal.

Glaucoma surgery after retinal detachment surgery is difficult, and the presence of a clip can limit the operating space and cause problems during implant insertion or other types of glaucoma surgery. In our case of post-traumatic glaucoma, partial sponge removal together with AGVI insertion showed beneficial results in terms of IOP control.