Six individuals and three groups are recognized as 2022 Jewish light Unsung Heroes on Wednesday, December 7 at 7 p.m. This year’s 13th annual event will be held in person at the new St. Louis Kaplan Feldman Holocaust Museum. 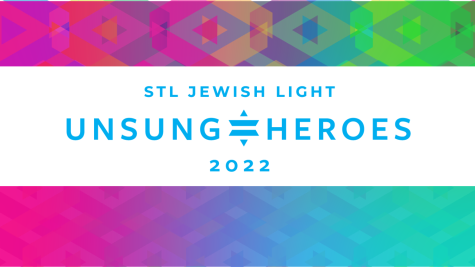 This year’s award winners are:

• Olivia Adams, Economic Stability and People Development Manager at the YWCA St. Louis Women’s Economic Stability Program (WESP). In this capacity, Adams has worked with the National Council of Jewish Women-St. Louis as a liaison to his Healing Hearts Bank program, which provides low-interest microloans up to $500 to women and their families to help them advance their financial independence. According to her nomination and several NCJWSTL employees, Adams goes beyond monitoring these borrowers to ensure they are very successful in making their payments and has also initiated financial workshops not only for YWCA borrowers but for all NCJWSTL Healing Hearts Banks borrowers.

• Tamara Adler. When Adler was unable to volunteer at St. Louis Children’s Hospital in person due to the pandemic, she created a way to volunteer remotely and began designing individually wrapped craft bags that could be given to children at the hospital. The bags are seasonally themed and packaged with a message of hope and images of a happy dog ​​named Charlie, who is the mascot of their nonprofit organization called Cheery Charlie Inc. Adler donates 300 craft bags to local hospitals each month.

• Sam German, who at just 17 seems to have a knack for identifying a need and finding a solution. For example, when Sam found that some tents used for overnight stays at Camp Sabra were old and dilapidated, he took it upon himself to raise the $5,000 it would take to replace them. He reached out to developer and philanthropist Michael Staenberg and asked if he would match the funds raised by Sam. Staenberg agreed and of course Sam was able to raise the funds needed and Sabra now has new tents. In BBYO, Sam was elected St. Louis Council Gadol (highest male leader) that school year. According to Ben Panet, the BBYO Regional Director, Sam played a “huge role” in supporting all BBYO chapters in St. Louis by developing great programs, bringing more Jewish teens to events and helping the St. Louis Council raise funds to collect year.

• dr Craig Reiss, Chief of Cardiovascular Medicine at St. Luke’s Hospital, who is a founding member and has served as Executive Chairman of the Missouri Torah Institute in Chesterfield for the past 12 years. He has helped the yeshiva thrive as it grew from six boys to about 120 from across the United States and several other countries.

Connect with your community every morning.

• Julie Frankel, who embodies what it really means to be a volunteer. She was co-chair of the St. Louis Jewish Book Festival for three years and still serves on the committee. She serves on the committee of the St. Louis Jewish Film Festival and reviews films to determine which should be seen by the committee as a whole. She also volunteers two mornings a week at the B’nai Amoona Congregation, one morning a week at the Crown Center, and is a lecturer for the Holocaust Museum.

Also Read :  All You Have To Do Is Ask: How To Seek Help For Mental Health In An Increasingly Crazy World

• Ben Horwitz and Nathan Goldstein. That spring, while they were juniors at Horton Watkins High School, Ben and Nathan formed a St. Louis chapter of a nonprofit called Planting Shade and planted 1,000 trees throughout the St. Louis area. They designed and sold t-shirts to raise funds to purchase 1,000 river birch seedlings native to Missouri. They approached and contacted several schools, hospitals, camps, community centers and homes in the area for permission to plant trees on their respective properties. They contacted MSD to locate homes in the area where sewer construction was causing deforestation and contacted homeowners to plant some of the trees to reforest those areas. They’ve also partnered with other local nonprofits to source shovels, mulch, and other necessary supplies for the planting.

• Founding members of MaTovu: Abby Bennett, Shira Berkowitz, Katie Garland, Barbara Levin, Russel Neiss, Paul Sorenson and Andrew Warshauer. Based in a former synagogue in south St. Louis, MaTovu is a volunteer-founded, volunteer-run, diverse and open Jewish community in St. Louis that strives for deep connection with its neighbors in the city and actively engages with important and addresses complex relevant issues of who and where its participants are now as Jews. It hosts a variety of spiritual, cultural, and social programs—including Shabbat services, concerts, readings, neighborhood gatherings, simchas, youth programs, adult Jewish education classes, and more. MaTovu also seeks to connect Jews with other diverse communities in our area by providing an inclusive meeting place for Jewish and non-Jewish programs.

• Michael Silerwho advocates for social justice. As an active member of the Shaare Emeth community’s Mental Health Initiative Committee, she has been instrumental in bringing awareness, knowledge and programs to community members on mental health issues during the pandemic. For years it has been the leading community for attending gay pride celebrations with the local Jewish community. She also delivers packages to returning parishioners, makes fortnightly phone calls to check on at-risk seniors, and became a notary last year as part of Shaare Emeth’s efforts to help notarize all postal ballot paperwork.

Also Read :  Quiet Quitting Is Taking Over the Workforce. Here's How to Fix It.

• advisor of Jewish light Ear Chadash Teen Page: Caroline Goldenberg (current); and (formerly) Jenny Wolkowitz, Mimi Pultman, Peggy Kaplan, and Lauren Sagel. The youth side of Ohr Chadash (meaning ‘new light’) began as an entirely volunteer-designed and volunteer-led effort in the 2008-2009 school year and has grown rapidly since then. Jewish light Former board members Jenny Wolkowitz and Mimi Pultman had the idea for a monthly magazine Jewish light Teen site that would be maintained by St. Louis teenagers who would write and edit stories, take photos, and design their own pages. Co-Chairs Wolkowitz and Pultman enlisted the help of Jewish light Staff to provide some training and supervision for the teens, but the volunteer co-chairs – then and now – do most of the work of recruiting and vetting staff, appointing editors for teen sites, arranging monthly meetings and providing to help teenagers plan and execute their stories, videos and photographs and create their layouts pages per month. These are volunteers who have been responsible for the youth site project from the start with a great deal of commitment and responsibility.

Visit stljewishlight.org/unsung for more information. Tickets for the event will be available online from October 3rd.