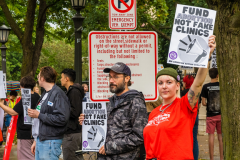 SAINT PAUL, MN — On September 16, the newly formed Minnesota Abortion Action Coalition (MNAAC) held its second action outside of the residence of Minnesota Gov. Tim Walz. MNAAC demanded that state officials end state funding for Crisis Pregnancy Centers (CPCs) and other manipulative anti-abortion organizations across the state. Since 2005, the state of Minnesota has spent $3.4 million per year on CPCs.

CPCs are “clinics” that purport to provide medical services for pregnant women but rarely have trained medical professionals. CPCs provide misleading or simply false medical information about birth control, sexual health and abortion – while using religiously charged propaganda to discourage those at risk from having an abortion. Minnesota has 11 to 1 more crisis pregnancy centers than abortion clinics, a huge disparity, especially given Minnesota’s new role as a “sanctuary” for out-of-state people seeking safe reproductive health services since Roe v Wade’s fall.

Despite the rainy weather, about 40 Minnesota residents stood outside Walz’s home, holding signs that read “fund abortion, no fake clinics” and “say no to government funding for crisis pregnancy centers.” Emcee Olivia Crull began the rally by chanting, “What do we do when abortion rights are attacked?” The crowd enthusiastically responded, “Stand up, stand up!” Passing cars honked their horns in support as the speeches began.

MNAAC invited speakers from across the Twin Cities movements to speak. Katherine Gould of the Climate Justice Committee spoke about how climate justice intersects with the many other progressive movements in the Twin Cities. She illustrated how oppressed nationalities, immigrants and working class workers are bearing the brunt of climate change due to environmental racism and class oppression. Environmental problems cause significantly higher health problems in these populations, and this is what makes health care in general, including reproductive health care, so critical to these oppressed groups.

Celia Nimz, a representative of the Freedom Road Socialist Organization, brought up the fact that Minnesota, as one of the few Midwestern states that still protects access to abortion, should invest resources in expanding reproductive access in the state. Nimz explained, “Crisis pregnancy centers are at the center of this because they take government funds that should be used for abortions.”

Linden Gawboy of the Twin Coalition for Justice for Jamar Clark, Ren Wischmann of Students for a Democratic Society and David Gilbert Pederson of the Minnesota Workers United also advocated ending government funding for CPCs. In addition to the speaker groups, the Minnesota Immigrant Rights Action Committee (MIRAC) and Women Against Military Madness (WAMM) also supported this rally.

Ashley Taylor-Gougé of the Anti-War Committee stated: “Anti-war outrage ended the draft in 1973, and the Supreme Court made the Roe v. Calf. We didn’t win those battles peacefully, and we didn’t win them with just one action. Without Boots on site, there would have been no pressure to make real change. When our lives are at stake, we must fight.”

MNAAC’s next public event is the New Member Meeting on Wednesday, September 28 at 5:30 p.m. at 4200 Cedar Avenue in Minneapolis. At this meeting, MNAAC members will plan future protests and actions for abortion rights.