A slim majority of Taiwanese have no confidence in the government’s ability to defend the nation, according to the results of a poll released yesterday by the Taiwan Public Opinion Foundation.

The poll showed that 51.5 percent of respondents lacked confidence in the government’s ability to defend the nation against a hypothetical Chinese invasion, including 21.1 percent who lacked “somewhat” confidence and 30.4 percent , who had “no confidence,” the foundation said at a press conference with Taipei.

It showed 41.2 percent have confidence in the government’s ability to defend Taiwan, with 13.9 percent of the total being “very confident” and 27.3 percent “somewhat confident.” 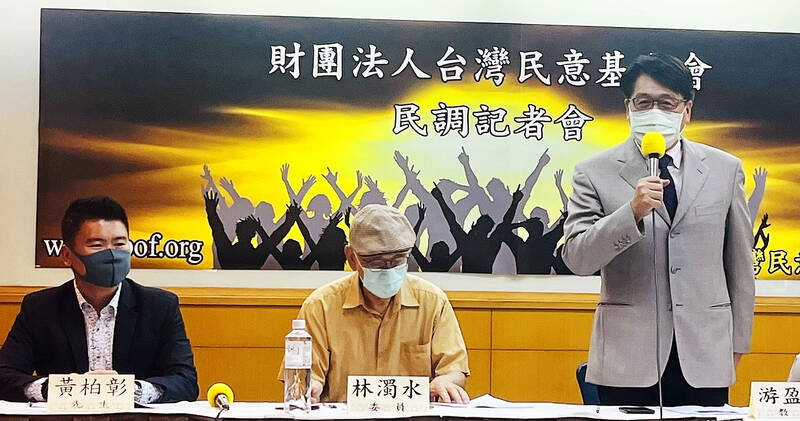 The foundation said 4.2 percent of respondents had no opinion, while the rest said they didn’t know.

President Tsai Ing-wen’s (蔡英文) management of cross-strait relations received 48.6 percent agreement among respondents, including 15.5 percent who “strongly agree” and 33.1 percent who “rather agree.” , as the survey showed.

The poll found that 43.6 percent agreed that Taiwan’s armed forces had responded weakly to China’s military threats, while 42.4 percent disagreed, it said, adding that 7 percent had no opinion.

When asked whether Taiwan or China would win if a conflict started tomorrow, 29.6 percent said Taiwan, 51.2 percent said China and 10.7 percent said the outcome was too close to predict, it said .

The public’s lack of confidence in the country’s defenses suggests that Taiwanese either believe the country’s armed forces are less prepared than Ukraine’s, or that the world would not support Taiwan in the event of a Chinese attack, the former said Lawmaker and political commentator Lin Cho-shui (林濁水) said.

With the US shifting its strategic focus to Asia-Pacific and having to protect the microchip supply chain for economic reasons, Taiwan should be in a better position than Ukraine to enlist Washington’s support, Lin said.

US President Joe Biden has said on several occasions that the US would defend Taiwan should China invade, he said.

These considerations suggest that Taiwanese concerns about national defense stem from a lack of trust in the armed forces, he said.

Still, the poll shows that public confidence in the military has improved since the Chinese Nationalist Party (KMT) took over the presidency, Lin said.

The survey of voting-age Taiwanese was conducted by telephone on Monday and Tuesday last week, collecting 1,005 valid samples. It has a 95 percent confidence level and a 3 percentage point margin of error.

Comments are moderated. Keep comments relevant to the article. Comments with abusive and obscene language, personal attacks of any kind or advertising will be removed and the user will be blocked. The final decision is at the discretion of the Taipei Times.