The rains began in June and soon more than a third of Pakistan was under water. In late August, Prime Minister Shehbaz Sharif compared the country’s losses to those from the terrible floods of 2010-2011. As of September, nearly eight million people have been displaced from their homes, with more than 600,000 taking refuge in camps. More than 1,500 people, including more than 500 children, have died.

Vaccination will not stop floodwaters or rebuild destroyed homes or restore the safety and dignity of women who have been robbed. But it buys time – and opportunity – between this disaster and the next

Just as they are not class-blind, crises like this are not gender-blind. “Women are already disadvantaged, often constrained by rigid gender norms that limit their mobility, burden them with unjust and onerous household and childcare responsibilities, and expose them to the risks of sexual assault, exploitation and harassment. These inequalities will only widen when there is some kind of disaster,” says Rachel Fisher Ingraham, gender adviser at Gavi. 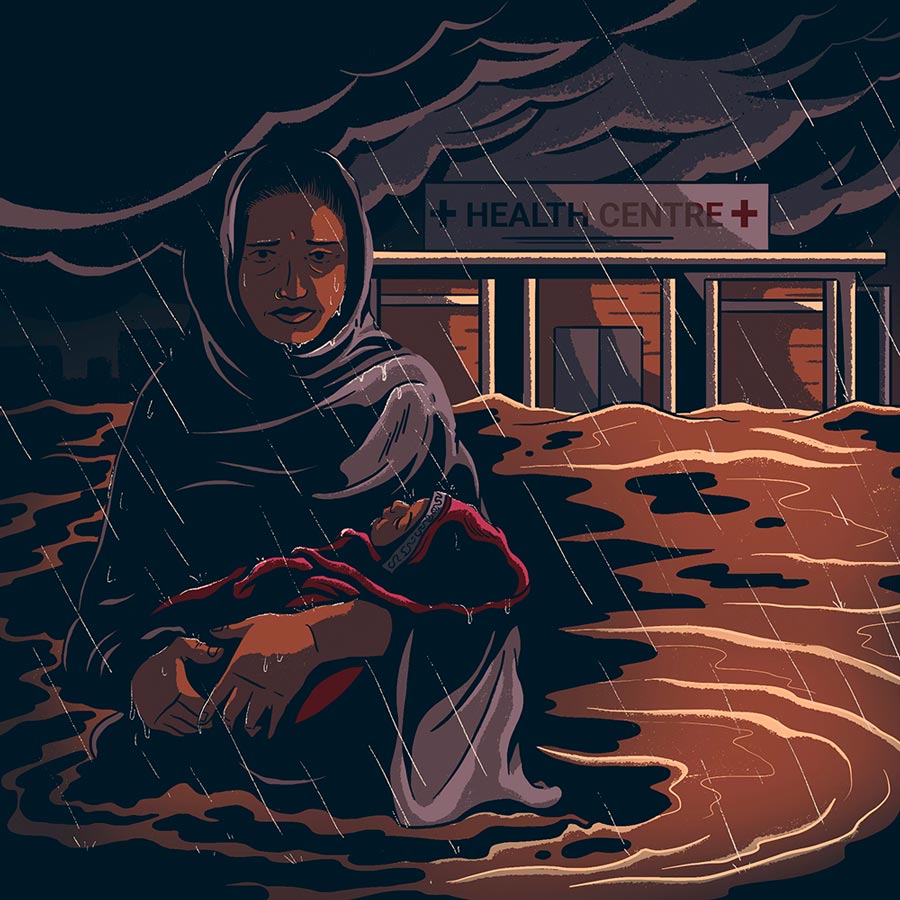 The dangers are great for all the millions affected. Recently homeless and often unable to access safe transportation, poor people displaced by the floods are at high risk of injury and disease. Now, as in 2010, reports of acute injuries, from trauma to snake bites, are mounting in flooded districts. And the biggest danger is the pathogens brewing in and around the stagnant waters. Waterborne diseases like cholera, mosquitoborne diseases like malaria, and respiratory and skin infections all thrive in a tide when water is ubiquitous and little is potable.

So the risk is universal, but not universally the same. Globally, women and children are 14 times more likely to die when disaster strikes. In Pakistan, where especially rural women tend to be young married, often pregnant and less likely than men to have survival skills such as swimming, navigation and literacy, women – especially poor women – face very difficult times in the coming months.

Pakistan has seen this game before. Amid the devastating floods of 2010, a full 86.8% of households in the 29 hardest-hit districts were forced to migrate. After the floods, both maternal mortality and early marriage increased. 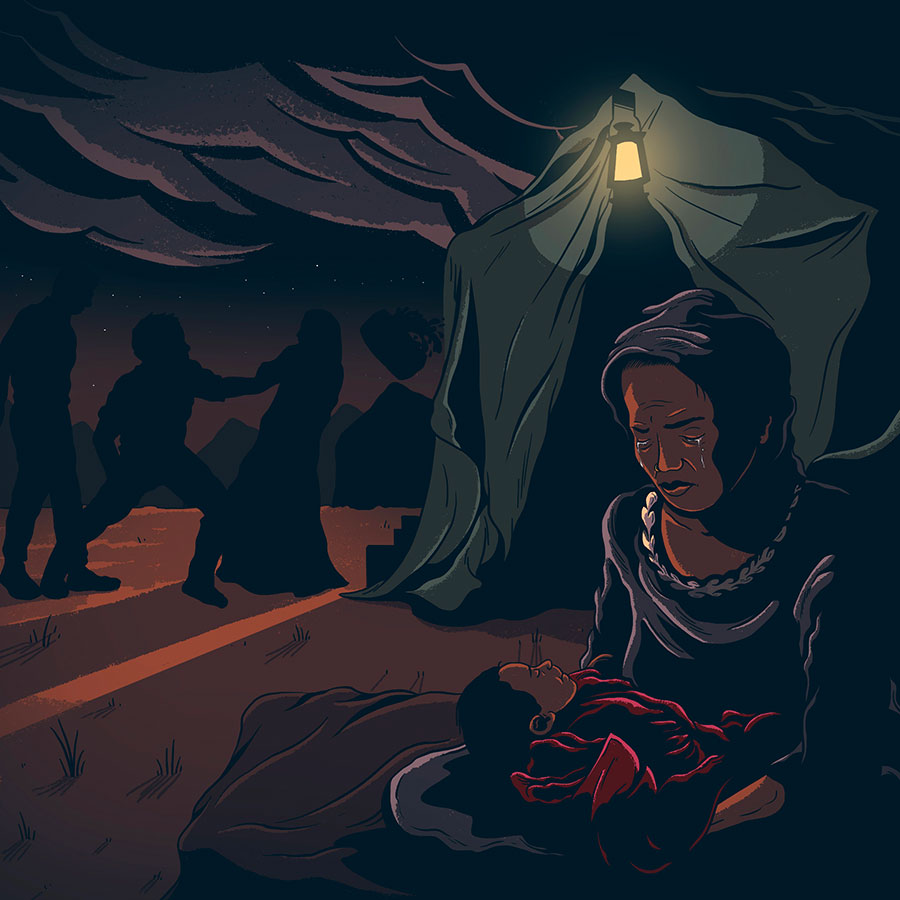 The threats don’t end when the rain stops. Six months after the 2010 floods, 46.9% of households in the 29 hardest-hit districts were still living in camps. In these crowded, typically unsanitary spaces, communicable diseases—such as cholera, but also scabies, a skin mite infestation that is most commonly reported in circumstances like these—are spreading rapidly.

These are not easy conditions for protecting children – mostly a woman’s domain – or carrying a pregnancy to term. UNFPA estimates that 650,000 women currently in flood-affected areas of Pakistan need access to maternal health services and that up to 73,000 will give birth in September. And if the recent floods in Pakistan provide the pattern, limited access to contraceptives amid widespread public disruption will lead to a surge in new, unwanted pregnancies in the coming months.

Displaced women are also at far greater risk of attack. Frontline health workers from districts previously hit by flooding, who were interviewed by researchers from Pakistan’s Aga Khan University, reported an increase1 in gender based violence and rape in these tents. Mostly the victims were women who had left their tents to fetch water, firewood or rations or to use the toilet at night.

“They have security issues left and right,” says Fisher Ingraham. Alongside the rising incidence of abuse, “there is always a possibility that women will be forced to trade sex for access to services or resources because they often have no control over or access to financial resources,” she explains.

Fear of gender implications in less-than-private, ad hoc settings makes some women uncomfortable with breastfeeding, the Aga Khan researchers reported in a paper published this year in the International Journal of Disaster Risk Reduction, causing their babies to die everything is dependent Stocks of baby food arrive in the camps.

Maternal and child malnutrition tends to increase during and after floods, a particular risk for children who were already struggling before the flood. Flooding has disrupted the normal operations of outpatient therapeutic feeding program (OTP) sites in Pakistan in recent years, putting already acutely vulnerable children at increasing risk — not just of starvation but of contagion: most malnourished children who die die to contagious disease.

In the midst of all these spikes in demand, flooding cripples vital nodes in the healthcare network. According to the WHO, 10% of health facilities across the country were damaged during the ongoing flooding, with disease surveillance and routine vaccination services “significantly disrupted” and the delivery of health services disrupted.

And even if a health center itself is intact, access roads can still be eroded or clogged. Shortages of medicines and consumables are common in such circumstances, as are staffing shortages. Reproductive care and routine immunizations have often been particularly hard hit during recent floods, health workers in flood-prone districts said.

Where healthcare facilities are out of order, ad hoc medical camps are typically set up to fill the gap. Sometimes, but not always, these camps are well equipped to provide gender-sensitive care, such as separate emergency tents for women, female staff, and adequate maternal and child health care. A Larkana health worker told researchers that during a recent flooding episode, female medical workers even managed to perform normal vaginal deliveries in the camps when time or access problems precluded a referral.

But a successful medical intervention in the field cannot be taken for granted. Even as houses are flooded and abandoned, rates of so-called ‘home births’ increase during floods – Muridaan Bibi from Sindh, for example, gave birth to her son in a pile of rubble next to her damaged home last month. Bibi and her little boy survived and continued in a truck in search of medical supplies. But the risks associated with such a delivery are high.

Lady Health Workers (LHWs) in some districts described how damage to infrastructure can make it very difficult to reach their patients – some recalled taking donkey carts to flooded areas and learning about miscarriages and deaths in pregnant women who were suffering Couldn’t get transport to a clinic.

And in Pakistan’s recent history, flooding has often resulted in sudden shortages of women health workers in backup medical facilities, the LHWs said: a development that can have profound implications for women’s access to health care. In conservative communities in Pakistan, cultural norms often prevent women from visiting male health workers without a male relative to accompany them, meaning some women displaced by the floods could not access medical care even when it was needed and was in close proximity.

Either way, it’s an injustice with potential tragedy waiting in the wings. Zoom out, and it’s also a second-order public health nightmare.

“We know from other countries that getting vaccinated is often a priority for men because they’re the ones going out and looking for work,” says Fisher Ingraham. But when access problems prevent women from getting vaccinated against diseases that could become wildfire epidemics during floods — like cholera and typhoid — or taking their children to health camps for routine vaccinations, it puts everyone at risk. 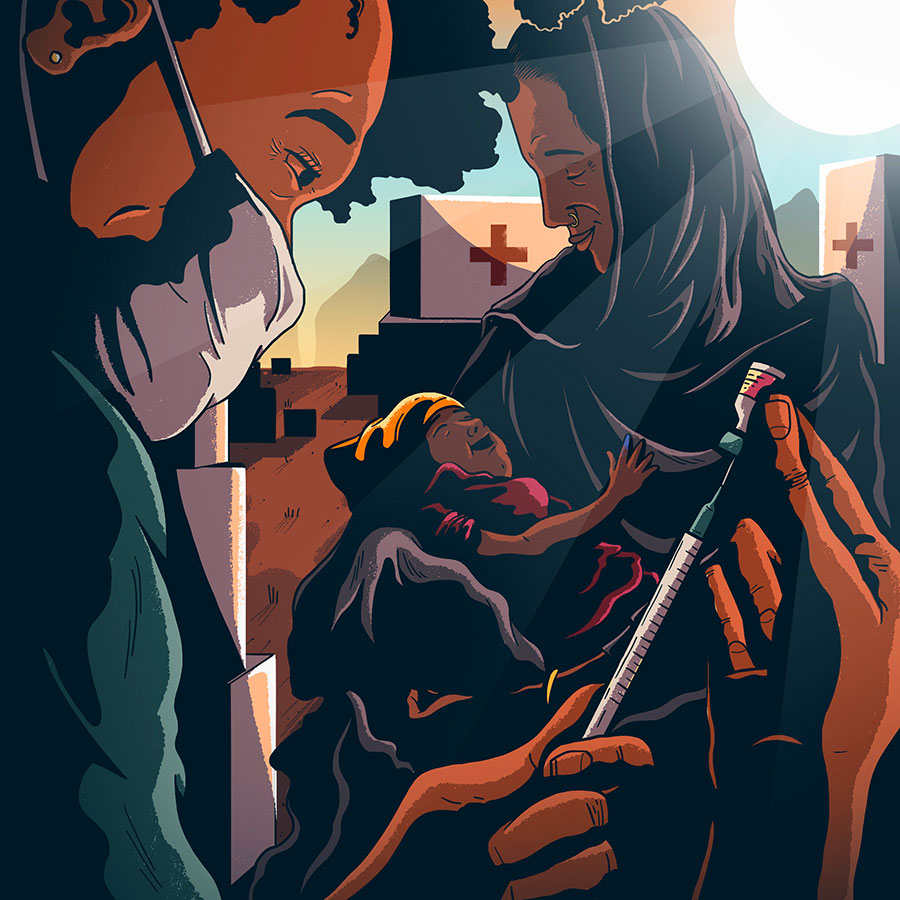 Vaccination will not stop floodwaters or rebuild destroyed homes or restore the safety and dignity of women who have been robbed. But it will buy time – and opportunity – between this disaster and the next: the “wave of disease and death” that WHO’s Tedros Ghebreyesus recently warned will follow the floods.

As Ilan Kelman, Professor of Disasters and Health at UCL, recently wrote for The Conversation, disasters are not caused by the weather but by sources of vulnerability. “Sources of vulnerability arise from a lack of power and resources to prepare for threats,” he explains. Poor infrastructure, social exclusion and unequal access to services, so no rain.

These are things that need to be improved, but at the very least it will take a lot of time and a lot of money. Vaccines – a drop of dangerous preparation packed in a glass vial – are an easy, portable start.

1. This is far from the only study that has found a positive association between climate-related disasters and violence against women and girls. The pattern repeats itself amid disasters around the world. BMJ published an overview paper on this topic in 2021 – read it here.