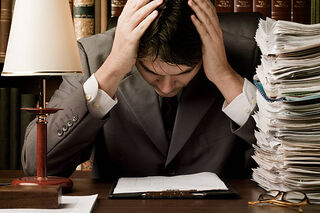 Man with a mand on his head surrounded by paperwork

The culture of the legal profession and its impact on mental health:

Pass or die is a question that has become relevant in the legal profession. A 2016 study found that the number of lawyers who are addicted to alcohol and suffering from mental illness is deeply worrying. Then the question arises, what is it about being a lawyer that brings many people down? A quote from The scavenger hunt depicts the toxic reality that unsuspecting first-year law students have just entered: “Look left, look right – one of you won’t be here next year.” in the name of the Socratic tradition. The rationale is that it was done to us, and therefore it will be done to you. Mental health is relegated to the philosophy of survival of the fittest.

Many years ago, as I drove to my 8:00 a.m. contract course, I can still remember feeling queasy as I neared my destination. This happened every day for almost three years. I have witnessed firsthand how fellow students were publicly humiliated when called to their feet to dissect a case, impossibly large assignments, and mind-boggling exams. I couldn’t escape the stress of having a professor drill me for precedents in front of 120 strangers, just praying they wouldn’t be next.

While this deeply uncomfortable experience didn’t permanently disarm my spirit, I can’t say it strengthened it or made me any better for the job. After graduating from law school, one must face the daunting multi-day bar exam. This test is a continuation of mind games rather than an assessment of legal inclination. The culture of the legal profession, from law school to practice, molds its participants into docile soldiers who are expected to dutifully carry on with no regard for self-confidence or self-care.

However, this culture has serious repercussions, as both newly licensed and veteran attorneys succumb to the dangers of a career dedicated to normalizing extreme stress, relentless hours, and unwavering professional demands that have led to some of the highest rates of substance abuse and mental illness illness compared to other occupations.

Findings on alcohol abuse among lawyers

A wide-ranging 2016 study conducted by the Hazelden Betty Ford Foundation and the American Bar Association found that up to one in three lawyers is a problem drinker. The study “The Prevalence of Substance Use and Other Mental Health Concerns Among American Attorneys” was published in Journal of Addiction Medicine and asked the 12,825 attorneys taking part in a national survey a series of questions about alcohol use. This landmark study was the first to simultaneously collect national data on substance use for attorneys and mental health problems. The results are compelling and have serious implications for the legal community. Specifically, 36.4 percent of the attorneys surveyed showed signs of alcohol abuse or addiction, while 21 percent self-reported alcohol problems.

Furthermore, the dangers of the legal profession seemed to affect both young and older lawyers equally. The study highlighted the high rates of alcohol abuse among new attorneys with only a few years of practice. Notably, nearly 32 percent of attorneys under the age of 30 were classified as problem drinkers. Additionally, those with less than 10 years of legal experience had the highest rates of alcohol problems, about a quarter, or 28.1 percent.

According to the Hazelden study, at least one in four lawyers reported suffering from depression, anxiety, or high levels of stress:

1. 20.6 percent of respondents reported a level consistent with problem drinking;

3. Nineteen percent of attorneys reported mild or severe anxiety; and

4. 11.5 percent of respondents admitted to having suicidal thoughts at some point in their career.

These findings paint a grim reality for the mental health of today’s attorneys. In fact, the statistics on the suicide rate of lawyers are rising. According to the Dave Nee Foundation in New York, a think tank researching depression among lawyers, American lawyers rank 5th in terms of suicide frequency. Nee claims that lawyers are the most depressed occupational group in the United States and 3, 6 times more likely to suffer from depression than non-lawyers. Additionally, about 26 percent of attorneys seeking therapy admit to suffering from anxiety and depression.

what can be done

Alcohol abuse, depression and suicide hit the legal profession hard. Some argue that much of the blame lies with America’s law schools, with the Nee Foundation claiming that 96 percent of law students suffer from stress. In addition, they found that the mental health of law students increases from an 8.9 percent rate of depression before matriculation and increases to about 40 percent by graduation and bar time in newly minted attorneys. Deans must stamp out the Socratic method, a sadistic means of torturing and humiliating students. Law firms should emphasize quality of life over billable hours and profit margins while incorporating wellness into their paradigm. As more state bar associations recognize the high rates of depression and suicide within the profession, they are establishing hotlines and resources where attorneys can feel more comfortable seeking advice without risking their careers.

1. Invest in attorney support programs and increase the availability of attorney-specific treatment.

4. Provide more education and training aimed at prevention, especially for those in the early stages of their careers.

Finally, awareness of the signs of substance abuse, depression and suicide are critical teaching skills that should be part of every law school curriculum, coupled with mandatory continuing education courses for all attorneys. More needs to be done to ensure that studying for the bar is not equated with dying later.