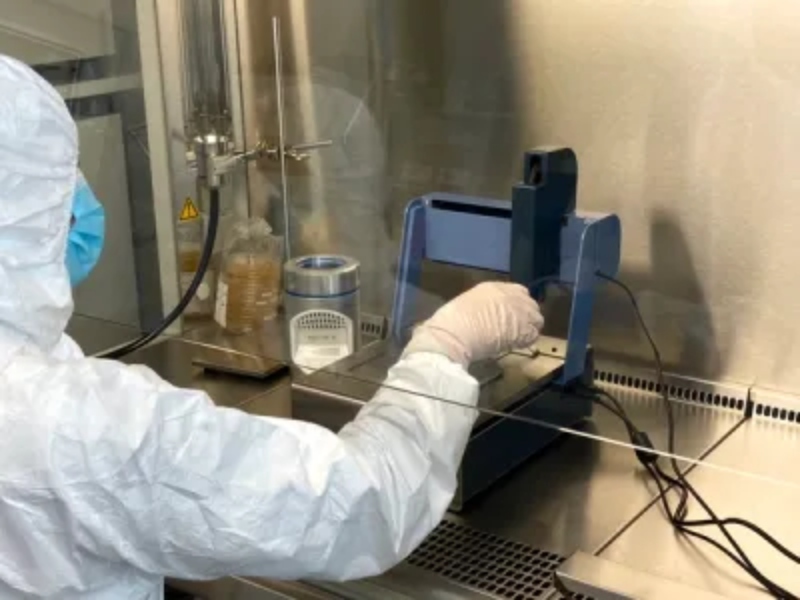 Swiss technology company SEED Biosciences has announced that its DISPENCELL pipetting robot has been approved for use in clean rooms and sterile environments.

The instrument has undergone a biosafety cabinet compliance test, certifying its use in sterile work environments. The tests were conducted by Hex Group, experts in contamination control in critical environments. David Deneuville, CTO, Co-Founder and Technical Director of HeX Group, explains what this means for the product and its users.

What does it mean when a product is approved for use in controlled environments?

A sterile or controlled environment is one that minimizes the presence of microbes to prevent contamination. Referring to the international ISO 14644 standards, a clean room is defined as “a room or area in which the number concentration of viable and non-viable airborne particles is controlled and classified and which is constructed and operated in such a way that the introduction, generation and retention of particles in space or work area”. Many sectors of activity rely on controlled and classified work environments, from the pharmaceutical industry and biotechnology to the healthcare sector and the food industry.

Biosafety cabinets, laminar flow VFL/HFL and isolators are airborne devices used in cleanrooms to protect a product, an operator and an environment in a local manner, often for the most critical environments in direct contact with the product. It is critical that any device, instrument or product brought into these sterile environments is compliant with the intended classification to avoid adversely affecting its classification. Introducing a non-compliant element into a cleanroom could result in particulate, microbiological, or chemical contamination that could affect the quality of the manufactured product. This is particularly critical in the cleanest aseptic environments such as Class A/B (GMP classification), ISO 5 (ISO classification), critical areas or ZAR4 (hospital classification). If a product is approved for use in a clean room, it can itself be used without fear of contamination of the environment.

How did you ensure that the DISPENCELL devices meet the clean room requirements?

For devices to be approved for use in cleanrooms and sterile work environments, they must undergo rigorous testing by a certified company, ideally an independent, competent laboratory specializing in the field. SEED Biosciences’ DISPENCELL has been tested by the team of Belgium-based experts at HeX Group for contamination control in critical environments. HeX Group has tested whether the instrument

What does this approval mean for DISPENCELL and its users?

DISPENCELL was developed by scientists for scientists, so we know how important it is that the equipment used in a laboratory environment does not compromise results or put people at risk. Tests performed under operational conditions assure users that DISPENCELL can be used in a biosafety cabinet without compromising its sterility and classification. This is critical to our customers, many of whom rely on controlled pharmaceutical manufacturing environments to ensure the quality and safety of their products. These compatibility tests not only give users more confidence in the device. They could also allow scientists to use DISPENCELL in a greater variety of contexts – and help achieve SEED Biosciences’ goal of democratizing the use of single cells in biology.

Can you tell us about SEED Biosciences?

By accelerating the use of precision medicine in personalized therapies, SEED Biosciences aims to set new standards in single cell biology for the benefit of patients. To do this, we provide scientists with innovative tools that are cell-friendly, affordable, intuitive, and most importantly, compliant with the most stringent regulatory requirements. Our first product, DISPENCELL, enables scientists to isolate single cell lines three times faster and ten times cheaper than existing solutions.

Can you tell us something about the HeX Group?

We started out in 1999 as the Hygiene and Methods department of the Puissance Air Group, a company specializing in air quality. In 2007 Puissance Air, with all its activities, became part of the leading provider of facilities and services, the ISS Group. Due to the high demand for contamination control, particularly in the hospital environment, the department was renamed Hygiene & Expertise in 2008 to better meet this demand. Since then, this department’s priority has been to provide its customers with a high quality professional service and since 1999 it has built a strong reputation in the field covering “Metrology”, “HVAC Related Engineering”, “Infection Risks and Microbiology” and “Expert” includes advice and advice”. On June 1, 2013, HeX Belgium became independent from ISS to focus on the areas of contamination control and environmental quality. It was only natural that HeX France was founded in 2014 with the aim of creating a comprehensive to offer a technical solution specifically tailored to the needs of its French customers.