As Sri Lanka’s public health system came under mounting pressure amid an unprecedented economic crisis, social media users in the island nation claimed that a “miracle mush” could “kill cancer cells”. The posts – shared hundreds of times – advised people to drink the purported cure on an empty stomach. But Sri Lankan oncologists and indigenous medical professionals warned that there is no scientific evidence it can cure cancer.

A recipe for the “miracle porridge that kills cancer cells” was published in this Facebook post on September 9, 2022. It has been shared more than 150 times.

The Sinhala caption of the post, translated into English, reads: “Please share as much as possible. May all cancer patients heal and recover.”

The purported recipe reads: “In a saucepan, combine cinnamon, garlic, curry leaves with a cup of coconut milk and bring to a simmer while stirring.

“Then add the juice of the Katupila leaves and water to the porridge and drink it on an empty stomach.”

Flueggea leucopyrus Willd., known as Katupila in Sri Lanka, is an herb used in indigenous and Ayurvedic medicine to treat a variety of conditions. 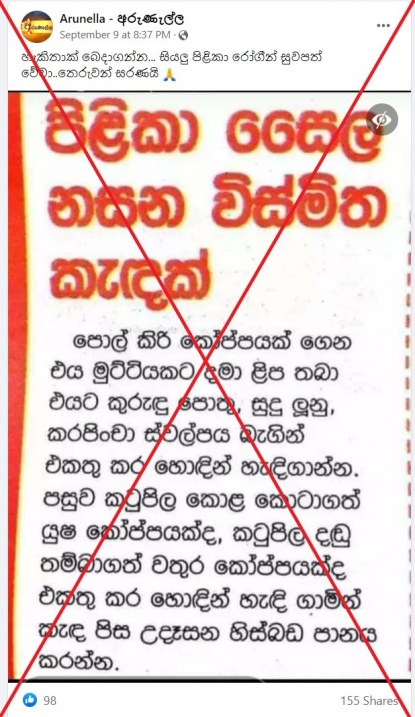 The claim circulated online as the island nation’s universal healthcare system, once the envy of its South Asian neighbors, collapsed under the strain of an unprecedented economic crisis.

Stocks of surgical equipment and life-saving medicines are nearing depletion, while chronic fuel shortages mean both patients and doctors are unable to travel for treatment, AFP reported.

The same image was shared almost 100 times along with a similar claim in Facebook posts published here, here and here.

However, in response to the posts, oncologists and indigenous medicine experts said there is no single substance proven to cure cancer.

Commenting on the porridge recipe, which is being touted as a cancer cure, Dr Norad Josephconsultant oncologist and vice chairman of the Sri Lanka Cancer Research Group, told AFP: “There is no credible scientific evidence to support this claim.”

He said that although katupila has been touted as a cancer cure since at least 2009, he has not seen a patient “cured” with it.

“In fact, combining this herb along with Western treatment regimens or relying on that treatment alone can have adverse effects on a patient,” he said.

Other health professionals in Asia-Pacific have previously told AFP that cancer patients should rely on proven treatments such as chemotherapy, surgery or radiation therapy.

“No substance has yet been discovered in the world that can be used to cure all forms of cancer,” said Professor Myung Seung-kwon of the National Cancer Center of South Korea.

“Cancer is treated by a variety of proven methods, including chemotherapy, surgery, and radiation therapy.”

dr LPA Karunathilake, a senior lecturer in indigenous medicine at the University of Colombo, told AFP that there is no such thing as a one-size-fits-all solution for cancer patients.

“A patient who’s been diagnosed with cancer can’t just drink this porridge and expect to get rid of the cancer,” he said.

He went on to say that healthy people should not drink the porridge as it could lead to other health complications.

“This herb is most commonly used in paste form, and there will be no benefit for a healthy person to drink the juice of its leaves,” he said. “The longer use [of this remedy] could lead to various side effects if used by a healthy person.”

In the Asia-Pacific region, AFP has debunked other misleading posts touting various herbal remedies as “cures” for cancer, including here, here, and here.